Here´s what I found as probable cause and fix: The parts most likely affected by the aging process in the area of voice CV appear to be the Cn02 (n=1..6) capacitors. I could not identify their exact type, but the marking sais they are 10nF with only 1% tolerance, so precision circuitry could be assumed. If I read the schematics correctly then together with the Rn02 resistors they form the input of the antilog. So there are two possible fixes. The first being to replace the capacitors with new high precision 10nF caps. The other fix is what I went for, firstly because I did not have the appropriate capacitors at hand and secondly because I felt that having control over the tuning would be handy. So I replaced R402 and R502 with precision trimpots. 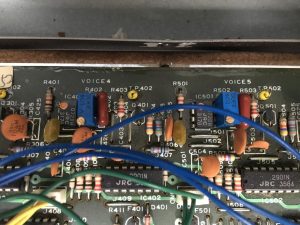 Since Rn02 are 15k the best trimpot value would be 20k. I only had 100k at hand so it was a little fiddely to set the right value but it works for now. I still have to get a couple of replacement parts for proper fixes anyway so I will eventually replace all Cn02 with new ones and all Rn02 with 20k trimpots.