The CS15D was released in 1979. It has two independent channels, each having its own preset selectors and inputs/outputs for cv/gate control. There are two audio outputs which are normalled to the channel one output. If this output is used as mix out, the crossfader blends between the two channels. If channel two output is used, each channel is put out at its respective jack.
Channel two features a manual control. If selected, one can shape the sound with the controls on the right side of the panel. Limited as they may seem they reveal the potential of the synth. The filter has its own envelope, as opposed to many other synths at the time, where the one and only envelope is shared by filter and amplifier. The two waveforms can be crossfaded, and there´s a separate noise mixer. Modulation is shared by the two channels. There is only one LFO, but it can be routed to either pitch, filter or amp.
What should be mentioned about the filter: On the one hand the filter is not capable of self-oscillation, but on the other hand the low end of the sound is not eliminated by the filter resonance. Most filters make the sound thinner with rising resonance, not this one.
I love my CS15D and will never give it away!

This is a follow-up to the general modification article.

In an effort to come up with a more detailed documentation for the mod I made an annotated picture of the mainboard followed by some explanations: 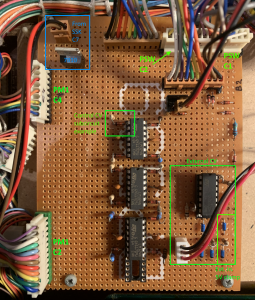 In the upper left corner, in blue, you see the power supply subcircuit for the board (see also The Tr7 Problem in this article).
The connector goes to connector C7 on the SSK board, which is fed with +/-15V directly from the PSU board. The various OpAmps on the board connect directly to it. Also the +15V line feeds the μA 7810 voltage regulator, which feeds all the potentiometers. 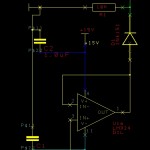 The control CV subcircuits are built around the three LM324 OpAmps in the board center.
The inputs (From Control Pot) are connected to the two brown on-board connectors which connect to the potentiometers and switches on the control board.
The outputs go to the two original connectors PM1-C2 and PM1-C4.

These two connectors are the original connectors that are normally connected to the PM1 preset board.

When installing the modification, not only is the preset board for channel one removed, but also the presets for channel two.
Therefor we need to implement the functionality of the channel 2 Manual switch. This is done by simply shortening pins 1 (+10) and 3 (MS2) of connector PSW-C1.
PSW-C2 is connected because we need to feed the 10V CV voltage to the control section of channel two. This is done via pin 9 (MS1) of PSW-C2.

I have installed three external control volatge inputs for pulse width, filter cutoff and resonance amount. They are simply added the respective control pot inputs of the OpAmps.
The external inputs are laied out for input signals in the 0-5V range. To assure the input rating each input is equipped with a clamping circuit which I took from Doepfer´s DIY page.
Since the CS15 works with CVs of +10V internally, the voltages are amplified by 2:1 non-inverting amplifier circuits around the LM324 on the lower right of the board.

That is basically the whole shebang of the mod. I will try to come up with  proper schematics of the board eventually. I have already started it.
But actually, if you are to eager to do the mod yourself and don´t want to wait, you should have sufficient information now to go ahead. You would of course have to find the correct values for the control pots in ther sevice maual, but if I could do it you can do it.

For discussions please refer to the muffwiggler thread.
So long…

Since I got my CS15D I´ve always known that one day I would make a certain modification to it, and this day has finally come: Manual control for channel 1.

When I opened the synth the first time I was pretty surprised by what preset meant before the time of (affordable) digital memory! Each preset is a set of resistors defining the CV values of the parameters.
The channel 1 and 2 presets reside on distinct PCBs.
I eventually managed to grab a copy of the service manual, and it made it pretty obvious that it would not be too hard to replace the presets by controls. The service manual reveals that all parameter CVs use the same 10V voltage source. The preset selectors route this source to the respective preset subcircuit. Channel 1 manual mode is not so much different. The voltage source feeds the control pots that are buffered by op-amps. 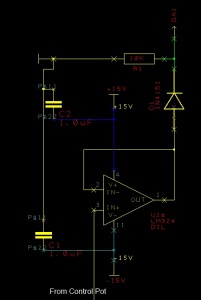 The overal design of the synth proved execellent for the modification.
The preset selector switchboard can be easily unscrewed from the front panel and the panel slits provide enough space for the new pots.

The preset board for channel 1 can also just be unplugged and taken out, and the board connectors reused to feed and source the modification board.

This design makes it easy to replace the original components with the custom control modification without altering the original circuits or messing up the front panel.

It was not so complicated, but a lot of soldering work..

Once finished, I hooked it all up, switched on the synth and… It worked!
But just for a short time, which brings me to….

A minute after I started calibration works on channel one, a flashy bang to my left silenced the audio output of the CS15. After a short notion of anger and a little fear I might have damaged an irreplaceable custom chip, I searched for the fault and located it soon: A transistor blew into pieces. Lucky enough the marking on the front was still readable, and a glance at the service manual revealed the function of the destroyed part. Tr7 on the VCO board is the actual 10V source for the preset circuit, regulating +15V from the main power supply down to 10V.

I first assumed I caused a short circuit while calibrating which lead to the destruction of the transistor, so I simply replaced it with a new one and went from there. Not long though till the replacement gave up, too. So obviously my modification lead to an overload. I replaced the voltage source for my mod board with a power supply generator, which told me my circuit draws ~30mA. The transistor provides a base-emitter current of 150mA, so my assumption didn´t seem so far fetched.

I then decided to include an 7810 voltage regulator into my board, feeding it directly from the main power supply. And what can I tell you… problem solved!

Yamahas design for the manual controls has a very handy side effect. The driver op amps can also work as CV mixers. So you can easily hook up an external CV input in parallel to the control pot for each parameter. Due to space limitations, I did that for pulse width, filter cutoff and resonance. Now I can feed in an LFO from my modular, too. But this also leaves some space for improvement on my circuit. The eurorack modul CV voltage is in the 5V range. The CS15D works with a 10V range. So I still have to include amplification for the incoming signals…

The mod works and I am very happy with it. I am not so much a fan of presets anyways and it never made sense to me to create the sound of a trumpet or clarinet with an analog synth. So now I have a brilliantly sounding synth with two manually controllable channels.

For the below video I hooked up MFBs Urzwerg to each of the channels CV/Gate inputs (via a CV converter of course) with two slightly different sequences. One channel plays the bass part and the other one the melodic part. In addition to the sequence I recorded two solo melodies.
Yamaha CS15D modified from MacroDX on Vimeo.