The Poly-61 was KORG´s successor to the Polysix. It was released in 1983. Today, in the late twothousandtwenties, it is gaining more and more popularity and used market prices are on the rise. After all it´s still an analog subtractive polysynth, although the digital control interface does not actually shout ‘analog’.
It is interesting to me how everyone seems to compare the Poly-61 to the Polysix by looking at their similarities, where in fact there are at best as many of them as there are differences. For example the filter in the Polysix is built around the famous SSM2044 chip whereas the Poly-61 uses a custom design.
A big plus on the 61´s side is the second oscillator, which cannot only be detuned but also intervalled. This makes the Poly-61 a bit more flexible than its predecessor, which only has a suboscillator. 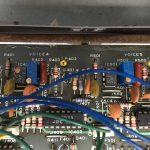 Here´s what I found as probable cause and fix: The parts most likely affected by the aging process...Read More » 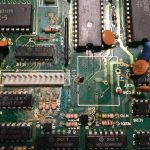 Like some other 80´s polysynths with memory, many of today´s Poly-61s suffer from battery leakage. The problem for most owners without knowledge of the technicalities is that the symptoms come on slowly and do not neccessarily hint at memory. While leaking, the battery may still provide enough...Read More »