If all of a sudden you are getting an error message on your Computer stating that your USB device failed then this is most likely due to worn out capacitors of the power supply.
I successfully got my device working again by replacing the two 1000uF electrolytics. The original ones where causing ripples on the supply voltage which lead to instable USB signals. 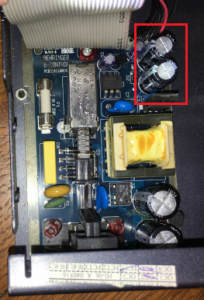 Here´s what I found as probable cause and fix: The parts most likely affected by the aging process in the area of voice CV appear to be the Cn02 (n=1..6) capacitors. I could not identify their exact type, but the marking sais they are 10nF with only 1% tolerance, so precision circuitry could be assumed. If I read the schematics correctly then together with the Rn02 resistors they form the input of the antilog. So there are two possible fixes. The first being to replace the capacitors with new high precision 10nF caps. The other fix is what I went for, firstly because I did not have the appropriate capacitors at hand and secondly because I felt that having control over the tuning would be handy. So I replaced R402 and R502 with precision trimpots.

Since Rn02 are 15k the best trimpot value would be 20k. I only had 100k at hand so it was a little fiddely to set the right value but it works for now. I still have to get a couple of replacement parts for proper fixes anyway so I will eventually replace all Cn02 with new ones and all Rn02 with 20k trimpots.

I purchaised such a unit with the risk of not knowing the exact amount of dammage it had taken. But I was determined to make it fully operable again. After all I thought it couldn´t be worse than the Opera-6 fix.

I looked around for information on the net but could not find much that was useful. Like others I remebered coming across a pretty extensive repair video, but it has been taken down by its author. The rest that is to be found are forum posts that describe the symptoms and take guesses and if they provide a solution it is only the general ‘re-crimp the connectors’ one. Some say that it helped, but never say why. And I wanted to know why …

There are plenty of download sources for the service manual, but the schematics contained are barely readable. It had to do though.

First step was to open up the unit and examine the damage on the CPU board. 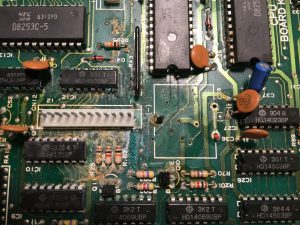 Interestingly enough the board was missing the battery entirely. The two wire stumps seemed to be the remainders of a first repair attempt.
It would not have made sense to look for certain errors before the general dammage on the board wasn´t fixed. So first step was to remove all parts that where affected by the leak. 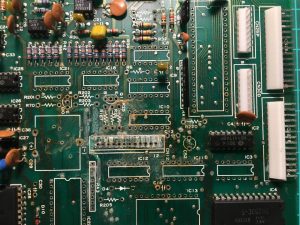 It should be noted that I also removed CN27B and IC2 after the picture was taken. Next was to clean the affected area. First I used 70% Isopropylic Alcohol and applied a big load of baking soda to neutralize the remaining acid. 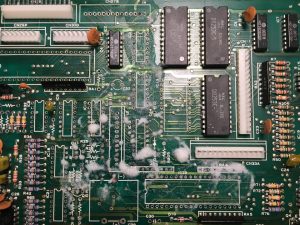 After removing the dried up soda with a tooth brush the damaged area looks alot better. 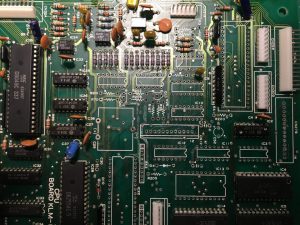 From here we can look for broken traces. With a strong lightsource we can x-ray the board for a visual check. Notice the broken traces in the red marked area. 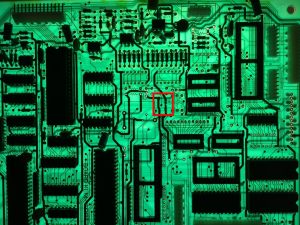 Visual examination is not enough though. It is best to verify all traces using a Digital Volt Meter in continuity mode. If at this point one has to be told to use insulated wire to fix the traces then one probably lacks the basic skills to take on this task at all …

As you can see on the picture already I used sockets instead of soldering the ICs into place directly. This helps in finding and correcting faults without putting stress on the chips.

I put in a lithium cell insead of the former reloadable type. This requires the load current resistor R70 to be replaced by a diode (1n4148 will do).

A heads up in advance: Yes, the board connectors can be the source of many problems on the Poly-61.

However it depends on the general damage, especially in the case of a leaked battery, whether it is enough to just re-crimp the connectors or whether more action is required. In my case the sockets of CN12 and CN27B where badly affected as well and needed to be cleaned to regain full connectivity. The crimps of the connectors where literally falling apart.

If a synth outputs sound constantly, chances are high that the VCA is open. Now in most cases the VCA is driven by an envelope generator. EGs need some sort of gate or trigger. The Poly-61 uses SSM2056 envelope generator ICs and they have a Gate input at pin 6. I checked the pins with a DVM and found ~1.3V at five of the six. Now 1.3V is given in the datasheet as the maximum required threshold voltage for the gate. So all these inputs where active. Looking at the schematics you will eventually find that the gate lines are directly connected to buffer IC outputs on KLM-509 via CN12. With CN12 being severely damaged by the battery acid and having barely any connectivity, the affected gate lines where floating. I assume that this causes the 2056 to pull the inputs high internally for some reason. I cleaned the pins of the board connector with a dremel brush and for the lack of replacement crimps came up with a temporary solution until I manage to source the right crimps. 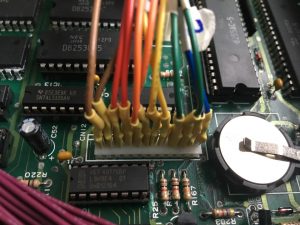 DCO2 for the six voices are provided by IC5  and IC14 on KLM-509. DCO2 was missing on voices 4-6. This meant that one of the chips was doing its job and the other one wasn´t. It turned out that a trace between IC11 and IC14 was cracked, leaving the CS line non-functional.

This was in fact an easy fix, because it was also only a cracked trace on KLM-509, but it was the hardest to find out because of the barely readable schematics. In the end I was lucky that I didn´t depend on it more.

That was about it. One Poly-61 back to life. All that was left where the typical restauration tasks like cleaning pots and key contacts and cosmetics.

Synth In A Case is an ensemble for Native Instruments Reaktor.
You will have to manually assign the controllers used by the BCR preset.