While examining one of my A-110-1s to help answer a forum question I noticed that it was equipped with a TL064 op-amp. A quick look at the schematics revealed that it is part of the waveform generation. I am not an expert but from what I´ve learned, the 064 is usually not the first choice for audio applications. So just for fun I replaced it with a TL084 I had lying around. 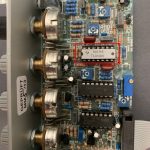 And what can I say, at least the triangle wave was greatly affected for the better by the swap. It removes a certain buzz atop the waveform, in layman’s terms.

In more factual words the swap removed a slight distortion on the positive peaks of the wave. This is most likely not a problem of my unit alone, because I have two of them which showed the same behaviour.

A look at the waveform and spectrum images shows this quite well. 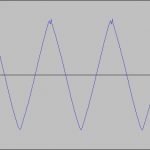 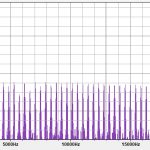 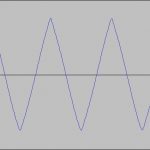 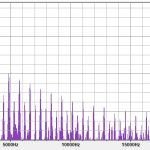 At least with a pair of headphones it is also audible quite well. Here´s an audio file you can listen to, but please note that the following disclaimer applies: Consume at your own risk! This pure audio wave may damage your ears when listened to at high volume, so turn down your playback volume first.