I was pretty amazed by the effect an electric mistress can have on synthpads as demonstrated in this video. So I bought one of the latest reissues they released, which happens to be a v5. Here is a very informative resource on Electric Mistresses where I also got the schematics from, thanks to the creator of the page.

Now the V5 is years apart from the early unit that was used in the aboved mentioned video and I never could get the sound out of it that I wanted. But what was even worse was that when I dialed the Rate down to zero, the modulation would eventually stop. This annoyed me greatly as well as the fact that the lowest mod rate was still to fast for my applications.

So yesterday came the time where I opened it up, picked up a copy of the schematics and tried to understand what was going on. My understanding of analog circuits is limited, but it was not to hard to locate the subcircuit around the Rate pot.

After some time I found that the problem of the halting LFO could be solved by increasing the value of R38 (30 Ohms), so I replaced it with a trimpot.

I then tried to decrease the overall LFO rate by increasing the value of R25 (3,9k) to change the time constant in conjuction with C16. This did not work out well because it affects the overall resistance of the subcircuit. Luckilly I had a bipolar capacitor in my fundus that could be used, so I went for a 10uF in parallel to C16.

With these two measures the lowest Rate now exhibits a period time of ~30s.

In the picture you can see the entirety of the mods. Note that you can see how I put the trimpot on the bottom side of the pcb so I have easy acccess to it for final adjustments. The parallel cap is connected via a switch so I can switch it off should I ever want the original higher rate value. 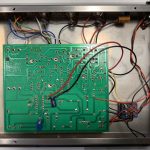 And here´s a little sound demo

A note on the trimpot: I only had a 10k trimmer at hand, which does work, but I´d suggest a 0,5k trimpot instead.

At first I wanted to do a proper alignment by the use of the available trimpots. But I found that if I wanted to get more drastic effects I could just trim all values to my taste by ear. All except the clock frequency that is.

With my next order of components I will get some higher values of bipolar caps to experiment with even lower rates.